I was in College Station this weekend for a 3 Day Startup competition hosted by Texas A&M and Startup Aggieland.  Saw this in the kitchen and thought it amazingly passive aggressive.  Haha! 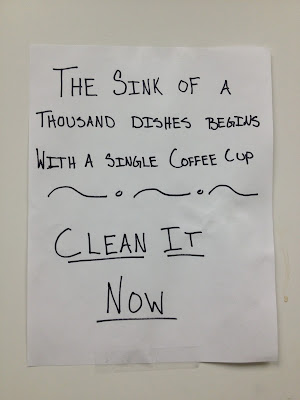 Posted by Payal Patel at 8:27 AM No comments:

Even though I live with my sister Binita, we don't see each other alot.  She has a crazy shift schedule while I have a corporate job with a CrossFit addiction.  Anywho, when I came back to the US, my sister mentioned there was a fancy new restaurant in Houston called Oxheart that was all the rage.  A week later my sweet friend Preeti mentioned she had been there and loved it.  And then the following week, one of my co-workers mentioned it too.  So, I decided to make a reservation for Binita and me as a "sisterly dinner".  I knew it had to be good if I had to book a reservation six weeks out and at 9 pm. 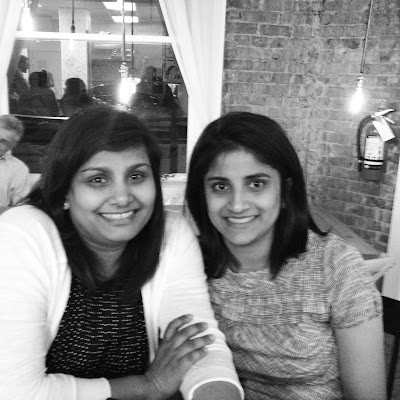 Last Monday finally came.  The restaurant called me a couple of times to confirm, left a voicemail message, and sent a text (overkill).  Binita drove and was freaked out that Oxheart is in a dodgy part of Houston (north of downtown between 45 and 59) and scared that someone would key her fancy Infiniti SUV.  I told her to chill, there were other pricey cars parked next to the ditch.  We walked up and could tell there was a restaurant in the building through the windows; however, it took a while to find the wooden door.  It pisses me off when establishments don't even have a sign on the door.  For the record, it's the angled wooden door on the corner.  Not the club next door with trash bags out front.

We walked in to find a cozy restaurant with about 10 small tables and a U-shaped bar overlooking the kitchen. The host told us our table wasn't ready and offered us two uncomfortable metal chairs next to the restroom.  Again, I was pissed.  If I had to wait six weeks for a reservation, I expect my table ready when I get there.  This is Houston, people.  We saw waiters running about, the host incessantly refilling the silverware drawers, and no one really paying attention to us.  15 minutes later, a woman comes by and senses we're a bit perturbed.  She offers us a free glass of champagne to sip while we wait (of course I agree!).  10 minutes later, we're still waiting, and I'm wondering if we could just sit on the bar.  I pull the waiter over and ask him if the empty seats on the bar overlooking the kitchen are available.  He said that those seats do have the same menu as the rest of the restaurant.  I'm thinking to myself, "Well, why the hell did you not offer me these bar seats overlooking the kitchen half an hour ago when I was on time for my reservation?!?"  I almost wanted to strangle him, but the rest of the evening made up for the rough front of the house experience.  And, quite frankly sitting at the bar is a cooler experience than one of the small tables.

We got situated on the bar where we saw 6 or 7 chefs meticulously preparing every dish using forceps, a hundred different plastic containers, and other cool gadgets.  The two waitresses wearing leather aprons were lovely and definitely knew their stuff.  For wine, we ordered the 1999 Kalin Cellars Semillon.  The waitress mentioned that Oxheart is the only restaurant in all of Texas that serves this wine.  Apparently, the sommelier knew it was good stuff and bought all the bottles the vineyard had barring distributors from getting it.  It was an interesting dry, sweet wine that tasted like nothing I had ever had before.  It was darned delicious and a good choice by the waitress.

Binita and I both ordered the garden 4-course tasting menu for $49/person.  For an extra $30, you can get wine pairings for each course, but we were happy with our semillon.  Below is the menu we had, and I'll do my best to explain things from my perspective.

First course was that sunflower seed soup.  That was the most flavorful, potent soup I've ever had, and it's incredible that emulsified sunflower seeds are the base.  There were some intense flavors and all sorts of textures going on in that dish.  And the chef comes out and pours the soup in your bowl from a tea kettle explaining the 50 dry ingredients at the bottom of the bowl.  The soup actually was my least favorite course because it aggravated a sore I had on the edge of my tongue.   It's also a very heavy soup and surprisingly filling.  Oxheart usually swaps out items on the menu every month based on what's in season, etc.  This soup has been on the menu six months.  So, even though I didn't care for it that much, others obviously do.

Second course was a beautiful montage of carrots sourced locally.  They base was a stack of seasoned carrot chunks covered in a yummy puree with carrot disks and flowers meticulously placed on top with forceps.  My description isn't the best because it's hard to explain, but boy howdy that dish was yummy.   This was my second favorite course.  And again, it is surprisingly filling. 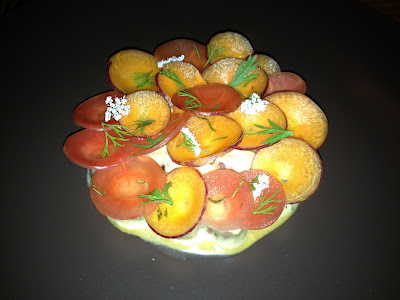 Third course was cauliflower cooked several ways in brown butter.  I normally hate cauliflower, but man, that dish was damn delicious.  Binita and the waitress say it's because of the brown butter.  I would eat that cauliflower dish any day of the week.  And, it's a sign of a good chef if he can get guests to like things they normally don't.

Last course was a slightly savory dessert of rye bread pudding.  No lie, it looked a little gross, but I did think it was an appropriate end to the meal.  And, the whipped yogurt and caraway-infused strawberries were amazeball.  Because I was SO full, I couldn't finish dessert.  Lesson for next time, pace yourself and save some space in your tummy for the end.

At the end of the meal, the chef brought out some chocolate spiced hazelnuts that were to die for.  I asked the waitress how they were made, and she said the chef's secret was to put extra salt in the dish to contrast the sweetness.  At that point, I wanted to jump out and say, "I know!  I know!  That's what I do with all my desserts too!!  Case in point, compost cookies."  But, Binita was giving me the evil eye that we needed to get home since it was almost midnight.

Overall, I enjoyed Oxheart because it was a food adventure.  This place is all about food and reminded me of the El Bulli case we discussed in my first year Marketing course at London Business School.  El Bulli was a restaurant in the Catalan region of Spain and started by Ferran Adria.  It was named the best restaurant in the world a record five times and is said to have pioneered molecular gastronomy with it's food lab in Barcelona.  El Bulli  was only open a few months a year, a two hour car drive away into the middle of nowhere, and next to impossible to get a reservation at.  But, it was a foodie's Mecca.  El Bulli actually closed in 2011, and Ferran came to LBS and HBS to ask students to help him come up with a new business model for his culinary talent as a student competition.  Unfortunately, I couldn't participate as my school life was already packed.   One of the takeaways from that Marketing case discussion was that an optimal customer experience can vary, and customers can't always articulate what they want.  Getting a reservation and traveling to El Bulli was a pain in the ass, but that added positively to the customer experience paradoxically.  And, when it came to the food, no one walked away disappointed.  Again, El Bulli focused on what it was good at: food.  My experience at Oxheart reminded me of El Bulli.

I actually saw a fab TED talk yesterday that echoed this concept.  It's by Dan Ariely, the author of "Predictably Irrational".  I had heard of the book in my Incentives in Organizations elective at LBS, but I haven't gotten around to reading it because my "to read" queue is forever backed up.  Anywho, I highly recommend watching this TED talk!  One of the best parts is where he talks about IKEA furniture that takes forever to assemble.  The effort that goes into building my IKEA furniture actually makes me like it better!  The cake mix example is so great too...haha!  See it here: http://www.ted.com/talks/dan_ariely_what_makes_us_feel_good_about_our_work.html

Back to Oxheart, I think there's a similar reason why I enjoyed the experience.  I had to wait six weeks to get a reservation, deal with some bad service upon arrival, shell out $150 for the evening, etc.  But, I take pride and am happy because that experience was authentic and had meaning.  To have and see the chef owner meticulously place flowers on my carrots with forceps made me feel like I was the only person in Oxheart, and his willingness to answer all my foodie questions revealed his expertise and passion.   People don't buy what you sell, they buy why sell it.  I walked out of Oxheart physically very full and emotionally inspired.

The very next day, the New York Times actually reviewed Oxheart and another Houston hotspot called Underbelly.  Read about them here: http://www.nytimes.com/2013/04/10/dining/reviews/making-houston-a-dining-destination.html?pagewanted=all